Following the successful pilot project ‘City to City: Human Responsibility’ in 2020, Creative Cities of Media Arts joined forces once again and embarked on a new international online artistic collaboration. Following the launch of a formal call, 13 artists from 13 Creative Cities were selected to participate in a three-month collaborative project in line with the City to City 2021 theme ‘PLAY!”, a direct response to the lack of “playfulness” in everyday human interaction throughout the pandemic. Thus, teams of artists were created and encouraged to collaboratively create high quality media art pieces to be disseminated within the UNESCO Creative Cities Network as well as to a wider audience.

This November, the Italian Fondazione Santagata for the Economics of Culture granted this collaborative initiative ‘Best International Project’, highlighting both the importance of inter-city collaboration and the role of culture and creativity in the implementation of the 2030 Agenda for Sustainable Development, which is also at the core of the Network’s mission and activities. 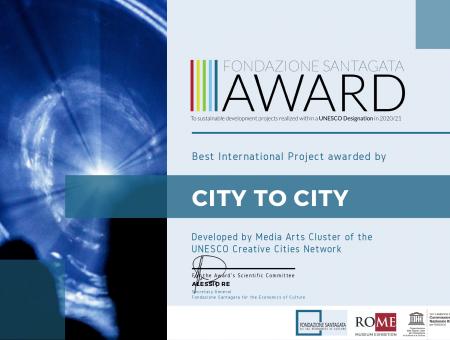